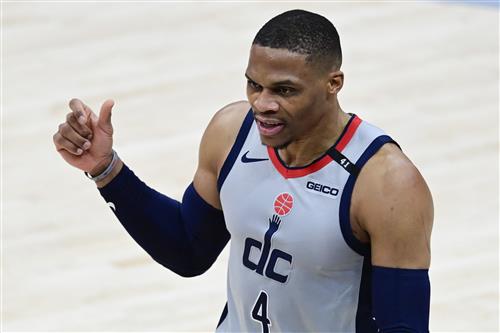 The Los Angeles Lakers are in the honeymoon stage with new star point guard Russell Westbrook. When the dust settles, Westbrook’s future with the team will be a popular storyline that follows the Lakers this season. Westbrook still has two seasons remaining on his five-year, $206 million contract but has a player option he can exercise to be a free agent next offseason.

It seems unlikely Westbrook would turn down $47 million heading into the 2022-23 season, but the same was thought about Chris Paul just a year ago. Paul decided to lose money in the short-term in favor of opting out to sign a lucrative long-term four-year, $120 million deal.

If Westbrook follows Paul’s lead, he would be an unrestricted free agent allowing him to sign with any team next summer. Former Nets executive Bobby Marks paints the picture of Westbrook’s two options indicating the most likely scenario is the guard remains locked into his current contract for the next two seasons.

“Westbrook has a $44.2 million player option, but the reality that his hometown Los Angeles Lakers give him the best shot at winning a championship could see the guard opt in to his contract for 2022-23,” Marks detailed on ESPN. “He could also do what Chris Paul did in Phoenix and decline the option to re-sign on a long-term contract but at a lower number.”

Westbrook has been angling to get back home to Los Angeles for years and all involved parties are singing the praises of why the Lakers blockbuster trade will work. LeBron James is posting photos of his workouts with his new superstar teammate and subtweeting critics. The reality is Westbrook is on his fourth team in four seasons, but the Lakers are hoping this streak comes to an end in 2022. During his introductory press conference, Westbrook did not exactly offer a long-term commitment to the Lakers while uttering phrases like, “while I’m here.”