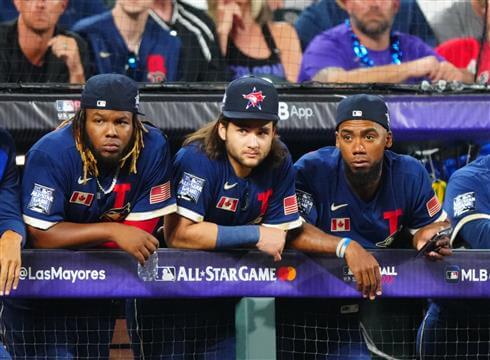 The San Francisco Giants proved in 2021 that teams built around veterans can still succeed in today's Major League Baseball, yet young talent certainly remains the modern game's most valuable currency.

So, it's time for a fresh look at which teams have the best young cores.

The average age of hitters and pitchers last season was roughly 28 years old, so we deemed it fair to set the age cutoff for this exercise at 26. Anyone that age or younger as of Opening Day—currently slated for March 31, but stay tuned—was eligible for consideration.

Yet in lieu of looking at all the players who fall under this umbrella, we wanted to trim the fat by narrowing the focus to each team's most likely contributors in 2022. This led us to constructing each team's core (see the full list here) out of 26-and-under players whom Steamer projects for at least 1 WAR this year.

Though the totality of that WAR provided us with a helpful guideline, we also didn't treat it as gospel. It was but one tool in our toolchest as we weighed the quantity, quality and health of teams' core players.

Before we count down the top 10, let's touch on some honorable mentions.

The biggest chunk (3.0, to be exact) of projected WAR here belongs to Witt, who exited 2021 as our No. 1 prospect after going off for a .936 OPS, 33 home runs and 29 stolen bases in the high minors. He projects to be the best part of a Royals core that, while solid, currently doesn't have a true star.

There's actually enough projected WAR here to put the Padres in the top 10, but three players doesn't really strike us as a "core." It's nonetheless worth pointing out that Steamer might be underrating two prospects who could make an impact in 2022: catcher Luis Campusano and left-hander MacKenzie Gore.

Wow, that's a lot of WAR…but half of it belongs to Soto, so what the Nationals have isn't so much a core as a smattering of satellites in orbit around a moon-sized space station of a ballplayer.