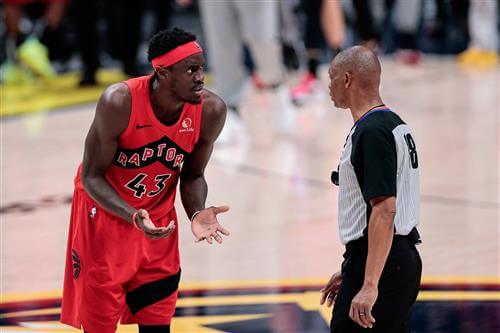 Rarely has a day gone by this offseason without a trade rumour linking Pascal Siakam to another NBA team. The 27-year-old forward has been linked to the Golden State Warriors, Sacramento Kings, Portland Trail Blazers, Los Angeles Clippers, and several other teams.

Siakam became an avatar for everything wrong with the Raptors last year. His season was defined by a series of late-game misses, which sent the team into an early-season hole that it never climbed out of. The former All-Star and Most Improved Player was benched in Toronto’s first win of the season and reportedly fined later in the year after a post-game exchange with Nick Nurse (the team refuted the reports).

In recent weeks, the team has publicly acknowledged the trade rumours. Bobby Webster refuted them. Masai Ujiri spoke about it at his press conference. Last week, Siakam’s agent Todd Ramasar said a trade from Toronto is the last thing on his client’s mind.

While there is plenty of posturing from all sides regarding trade rumours, the biggest reason to believe Siakam isn’t going anywhere has nothing to do with his relationship with the team or anything sentimental (ask DeMar DeRozan if the front office cares about that). The Raptors are simply not going to entertain a Pascal Siakam trade right now because he is not appropriately valued in the trade market.

The proposed trades include players like James Wiseman and CJ McCollum as centrepieces coming back to Toronto. With all due respect to those players, Siakam averaged 21.4 points, 7.2 rebounds, and 4.5 assists last season in what was considered a down year.