Brooks Boyer has a detailed and truly touching Michael Jordan story to share while the 10-part docuseries “The Last Dance” runs on Sunday evenings on ESPN.

Boyer is in his 17th season with the White Sox, holding the position of senior vice president of chief revenue and marketing. But he was part of the Chicago Bulls corporate partnerships department for 10 years, including the second championship three-peat, from the 1995-96 season through the 1997-98 season.

In fact, the 1994 Notre Dame graduate and one-time basketball standout advanced from intern to full-time employee following the first three Bulls’ championships and Jordan’s initial retirement and brief move into baseball with the White Sox.

“There were people in the office who thought, ‘This run is over. They had a good run, won three championships, and Jordan is not coming back,’” Boyer said. “All these full-timers leave, and there were a bunch of us interns sitting there, and it was like, ‘Do you guys want full-time jobs?’

“So, Jordan playing baseball actually got me in full time into this industry. And then I’m selling sponsorships for the Bulls and Jordan’s playing baseball and swinging at curveballs. Thank God he was missing all of them.”

Jordan’s return to the NBA eventually leads to Boyer and a game in Memphis. Boyer had sold the title sponsorship to AutoZone, which is based there.

AutoZone contacted Boyer the morning of the game and told him that a terminally ill 12-year-old child and his family would be in a private room 30 feet away from the Bulls locker room at The Pyramid (at the time the home of the Grizzlies), and asked if Jordan could say hello. Boyer couldn’t make any promises but said he would try to arrange something.

Later that morning, when the team was flying out, Boyer noticed tension among the players, and nobody was talking. He learned that coach Phil Jackson and Jordan had gone at it during a rough morning practice.

CONTINUE TO SITE
12 Up

Oh, baby, do I LOVE getting cheating defined to me by a Boston sports fan. Can't think of anything more enjoyable. Just for reference's sake, this is the fan base that just fired a video replay technician as the fall guy to escape a cheating scandal that hung over their 2018 World Series win. A fan base that cheers on the Patriots, but not so loudly that their illegal cameras shake and they lose the practice footage. Without a shred of irony, Boston's own Bill Simmons flamed A-Rod as a cheater, replaying his 2004 ALCS Game 6 glove slap, a moment that was pathetic, sad, dinky, and endemic of a season falling apart, but…was it cheating? Really?

This was at the tail end of the Curt Schilling bloody sock game. Truly, it was the Yankees' last gasp. Down 4-2 in the eighth inning, A-Rod approached Bronson Arroyo on a slow roller and daintily smacked the pitcher's glove, dislodging the ball, and allowing Derek Jeter to score. Rodriguez's contact with the glove was ruled to be out of bounds, and the run didn't count. If the Yanks weren't already dead, they certainly had been killed as No. 13 retreated to the dugout.

Tomorrow marks the two-year anniversary of a seemingly innocuous decision that ultimately backfired. On May 4, 2018, the Indians designated third baseman Gio Urshela for assignment. Five days later, they traded him to the Blue Jays for cash considerations, ending his decade-long tenure in the organization.

The decision to move on from Urshela made perfect sense at the time. He had never been a top prospect, instead profiling as a glove-first depth infielder. His offensive numbers in the high minors were fine but unspectacular. That wasn’t the case in MLB, though, as he’d hit just .225/.273/.314 (56 wRC+) in parts of three seasons. Most pressing, he’d exhausted all his minor-league options by 2018. Rather than carrying Urshela on an active roster already featuring Francisco Lindor, José Ramírez, Jason Kipnis and Erik González (himself out of options and capable of playing shortstop), the front office elected to move on.

The worst bullpen meltdown of the 2001 World Series was not the one you think. You probably go right to Byung-Hyun Kim blowing saves in games four and five in Yankee Stadium, putting the Diamondbacks on the brink of elimination heading into game six. But that’s not it.

You might also think of Mariano Rivera blowing the save in game seven. Mark Grace singled, Rivera turned a sac bunt attempt into runners on first and second, Tony Womack eventually knocked home the tying run. Then Tim McCarver – without so much as a spoiler alert – laid out exactly what was about to happen like he’d seen it already, and Luis Gonzalez shoveled a ball over the drawn in infield to win the World Series. Just like that, the greatest closer of all time blew game seven of the World Series, ending a Yankee dynasty in its tracks.

But that’s not it either. I’m talking about Jay Witasick’s beautifully disastrous performance in game six.

The Baltimore Orioles are showing their support of teammate Trey Mancini as he battles cancer.

Mancini had a malignant tumor removed from his colon in March, a week after the tumor was discovered during a colonoscopy.

CONTINUE TO SITE
12 Up

Despite its original release being 21 years ago today, this may be the best baseball-themed television commercial of all time. For you youngsters out there, time for a history lesson: On May 2, 1999, Atlanta Braves legends Greg Maddux and Tom Glavine teamed up to declare that "chicks dig the long ball" in a notorious television ad for Nike.

The Oakland Athletics organization is feeling the first-hand impact of the current COVID-19 pandemic.

The A’s announced on Friday that former minor league infielder Miguel Marte has passed away at the young age of 30 after contracting the virus.

Yesterday Bob Nightengale of USA Today reported that Major League Baseball and the MLB Umpires Association were negotiating a modification to their collective bargaining agreement that would reduce umps’ pay for the 2020 season. If no agreement could be reached, umpires would not be paid.

Last Sunday’s episodes of ESPN’s “The Last Dance” were particularly notable for highlighting Dennis Rodman’s vacation during the 1997-98 Bulls season.

Rodman left the Bulls midseason for a 48-hour trip to Las Vegas, and after not returning in time, Michael Jordan went to Rodman’s apartment, finding the Worm and bringing him to practice.

CONTINUE TO SITE
The Score 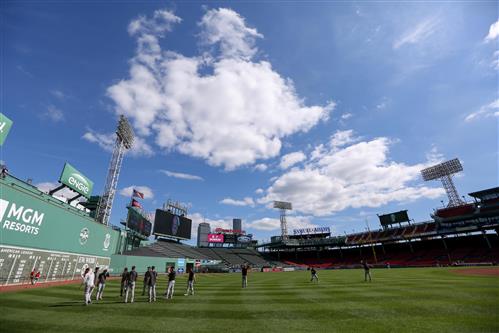 Before Major League Baseball begins what would be an abbreviated 2020 season, teams will reconvene for another round of spring training, possibly in their respective home cities.

MLB has not made a final decision about where spring training will be conducted, according to Nightengale.

By moving the rest of spring training from the usual facilities in Florida and Arizona, MLB could reduce travel, save money on housing players in hotels, and allow the season to start quicker.