Luis Suarez’s hopes of leaving Barcelona for Juventus have taken a huge blow with coach Andrea Pirlo admitting a deal for the Uruguay international “is difficult.”

END_OF_DOCUMENT_TOKEN_TO_BE_REPLACED

The news that the football world has expected for a couple days now is official. Gareth Bale will join Tottenham Hotspur on a season long loan. It’s expected that Real Madrid and Tottenham will split the Welshman’s lucrative wages. Tottenham will also have the opportunity to extend the loan for another year at the end of the current season.

END_OF_DOCUMENT_TOKEN_TO_BE_REPLACED

Kai Havertz insists he is not under pressure to justify his £75.8m price tag at Chelsea, but admits he needs time to adapt to Premier League football.

END_OF_DOCUMENT_TOKEN_TO_BE_REPLACED

Time is running out for Europe's top clubs to complete their transfer business. With the window closing on Oct. 5, we take a look at the most noteworthy sagas that require a resolution in the coming weeks.

END_OF_DOCUMENT_TOKEN_TO_BE_REPLACED

DO NOT INSULT THIS MAN'S FAMILY!!!

END_OF_DOCUMENT_TOKEN_TO_BE_REPLACED

Barcelona boss Ronald Koeman says he’s not expecting any new signings before the season of the new La Liga season.

END_OF_DOCUMENT_TOKEN_TO_BE_REPLACED

Kylian Mbappe has reportedly told PSG he wants to leave in 2021 and in a new report from Josep Pedrerol of El Chiringuito, Mbappe will only leave PSG for one club, Real Madrid.

Real Madrid do not intend to make any offer until PSG have given the green light indicating that they are willing to discuss the sale of the player. The reasons listed behind Mbappe’s desire include his adoration of Zidane, his dream of playing at the club, his ability to win Champions Leagues as well as the Balon d’Or, and he is also enticed by the growing French contingent at the club.

Gianluca di Marzio went on TV program CalcioMercato – L’Originale today and dropped a pretty sad bomb. According to the transfer guru, Fiorentina are trying to move Patrick Cutrone, either on loan or permanently, but the U21 international doesn’t want to leave. It’s a pretty massive bummer and a good example of how complex the player market is this summer.

To briefly sum up, Cutrone joined the Viola on from Wolverhampton Wanderers in January for an initial €3 million fee. The initial terms were that he’d stay in Florence for 18 months, at which point it would cost another €18 million to make the move permanent. He’d joined Wolves from AC Milan the previous summer for €18 million as the Rossoneri shipped him out to keep themselves in the black (yeah sure), but he never settled in and they returned him to Italy halfway through the year.

Real Madrid attacker Lucas Vazquez has received an offer to join a Qatari team this transfer window, according to a report from MARCA. Madrid will give Vazquez the right to make the final decision about his future —per that same report— given that his current deal expires next summer.

Vazquez was rumored to be a target for both Napoli and Tottenham this transfer window as well, although that interest didn’t come to fruition.

Manchester United have been frustrated in their attempts to sign Jadon Sancho in the summer transfer window.

Manchester United could make a stunning move for Real Madrid outcast Gareth Bale with frustration growing over their pursuit of Borussia Dortmund winger Jadon Sancho. The Bundesliga side are refusing to budge on their £108million asking price.

Ole Gunnar Solskjaer wants the England international to help him close the gap on Liverpool and Manchester City.

Barcelona have reportedly set their sights on Sevilla defender Jules Koundé but are aware that it will be very difficult to land the 21-year-old.

According to Mundo Deportivo, the Catalans have liked the youngster for a while but were blown away by his performance against Inter in the Europa League final.

It looks like Toronto FC will be adding some depth at the back.

According to The Athletic’s Joshua Kloke, 21-year-old Liverpool FC defender Tony Gallacher will be joining TFC on loan ahead of their next phase of games, which is set to kickoff on Sept. 19.

According to Kloke, Gallacher is apparently already in Toronto quarantining and will be announced as a loan signing by the club in the coming days

Gallacher has 32 matches under his belt for Liverpool’s U-23 squad, making 15 Premier League 2 appearances last season at either left-back or right-back.

Ousmane Dembele is set to make his long-awaited return to Barcelona action on Saturday in a pre-season friendly against Nastic.

The French forward has not featured for the Catalan giants at all in 2020 due to injury, and his last appearance came all the way back in November 2019 in the Champions League against Borussia Dortmund.

Dembele underwent surgery on a torn hamstring in February and is now back to full fitness ahead of the start of the new La Liga season.

Serie A's striker merry-go-round continues to spin as we careen headlong into the start of the 2020-2021 season. All summer long, we've danced among Edin Dzeko, Arkadiusz Milik, Moise Kean and Luis Suarez rumors, with the future of all four strikers intertwined and dependent on somebody…anybody…making the first move. For much of the summer, it seemed like Roma would pull the pin, offering Cengiz Ünder plus cash for Milik, which would then trigger the remaining dominoes, namely Dzeko to Inter Milan or Juventus.

With Napoli sticking to their absurd demands for Milik, which at times included Ünder, Riccardi and as much as €20 million, Roma CEO/DS Guido Fienga balked at that asking price, and with good reason. With one year remaining on his deal, his replacement (Andrea Petagna) already purchased and his preferred destination (Juventus) not really interested in him, Napoli had about as little leverage as a club possibly could in this situation—Milik wasn't even called up for Napoli's recently friendlies either.

Inter Milan will need to try harder to pry N'Golo Kante away from Chelsea this summer.

Chelsea rejected the Italian club's offer for the midfielder, which included Marcelo Brozovic in part-exchange, The Guardian's Jacob Steinberg reports. Chelsea have also turned down the opportunity to sign Christian Eriksen in a straight transfer or as a makeweight in a deal for Kante.

It appears that Antonio Conte would have to sell some members of his squad to fund a straight-cash offer for Kante.

The Frenchman was one of the stars of Conte's 2016-17 Premier League-winning Chelsea side after moving to Stamford Bridge from Leicester City for £32 million.

West Ham have made a £30m bid for James Tarkowski after having their first offer for the Burnley centre-back rejected. David Moyes is keen to strengthen his leaky defence and is determined to sign Tarkowski following the controversial sale of Grady Diangana to West Brom. West Ham’s manager is a big admirer of the 27-year-old and hopes to convince Burnley to sell after having an initial offer of £27m turned down.

Although Tarkowski is pushing for a move, it is understood Sean Dyche is relaxed about the situation. Burnley’s manager warned this week that Tarkowski would not be sold “on the cheap” and the club could hold out for as much as £50m for the former Brentford player.

West Ham are under pressure to strengthen their squad after allowing Diangana to go for £18m. The 22-year-old winger’s departure has gone down badly with his former teammates. Mark Noble, West Ham’s captain, tweeted that he was “angry and sad” after the academy graduate’s move was confirmed.

Manchester United appear to be making progress in their pursuit of Borussia Dortmund winger Jadon Sancho. The Red Devils' hopes of landing the England international have increased after progress was made on wages and agent fees, according to ESPN.

Ole Gunnar Solskjaer's team has longed been linked with the 20-year-old former Manchester City youth player, who has grown into one of the top young stars in the world while developing at Dortmund. Now talks have taken a step forward ahead of the Oct. 5 transfer deadline for Premier League clubs. A deal still very well could be reached.

What's it like to play a major soccer match without fans in the stadium?!

"It’s like going to a circus without clowns, going to a garden without flowers,” Ronaldo told reporters Tuesday after Portugal defeated Sweden at an empty Friends Arena in Solna.

Of course, the fan ban is a part of the global effort to stop the spread of COVID-19.

Ronaldo joins Iran's Ali Daei in the rarefied air after connecting on a gorgeous free kick just before halftime to give Portugal a 1-0 lead. He doubled the lead and made it 101 for his career in the 72nd minute on another stunning strike.

The Premier League has announced it has received three positive tests in its first round of testing ahead of the new season.

"The Premier League can today confirm that between Monday 31 August and Sunday 6 September, 1,605 players and Club staff were tested for COVID-19. Of these, there were three new positive tests," a Premier League statement read on Monday. 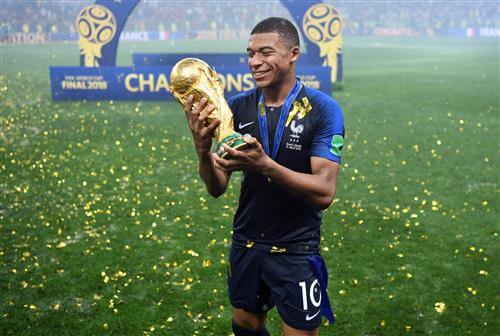 Kylian Mbappe is ruled out of France's Nations League meeting with Croatia on Tuesday after he tested positive for COVID-19 on Monday, the French Football Federation announced.

The Paris Saint-Germain forward was distanced from his international teammates at the end of Monday's training session. He tested negative twice before receiving his positive result.

Mbappe is the seventh PSG player to test positive for COVID-19 following a controversial team vacation to Ibiza at the end of the 2019-20 campaign.

Inter vice-president Javier Zanetti says his club are not in talks with Barcelona over a move for Lautaro Martinez despite rumors suggesting the Catalans will make one more push for the Argentine.

The 23-year-old has been linked with Barcelona all season but a move has failed to materialise, although Goal have reported the Catalans are preparing a final offer for the Nerazzurri striker.

Zanetti says there are no negotiations currently and that he thinks Martinez is happy at the San Siro.

Barcelona have come up with a plan aimed at reducing the current tension between the club and captain Lionel Messi.

The Argentine gave an explosive interview to Goal’s Ruben Uria on Friday where he revealed he was unhappy with Barcelona and is only staying because the club made it impossible for him to leave.

Messi was also critical of president Josep Maria Bartomeu. The 33-year-old said the Barca chief “didn’t keep his word” with regards letting Messi decide his future and added that “there’s has been no project or anything for a long time, they juggle and cover holes as things go by.”

According to Oriol Tortajada at L’Esportiu, Barcelona have now taken steps to try and repair their relationship with the 33-year-old.