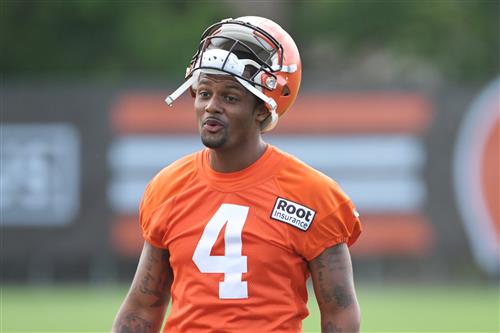 As the NFL’s appeal, to the NFL, of the six-game suspension imposed on Browns quarterback Deshaun Watson heads toward an “expedited” (by rule) resolution, the NFL Players Association seems to be trying to create any leverage that it can for a settlement. This effort includes floating the notion to some in the media that Watson could actually play in Week One against the Panthers, if/when a federal lawsuit is filed — and if/when a federal judge finds that Watson should be permitted to play while the litigation proceeds.

It’s a weak and flimsy argument, and it most likely will not prevail in court. It also won’t do much if anything to persuade the NFL that it should cut a deal with the union now, because the NFL surely realizes the flaws in this approach.

The basic argument seems to go like this — because the NFL appealed Judge Sue L. Robinson’s six-game suspension of Watson, that punishment disappears. It will be replaced (as the argument continues) by whatever Peter Harvey, the Commissioner’s designee, decides to impose. Thus, when the time comes to take the NFL to court (and in turn to try to delay the commencement of the suspension), a preliminary injunction entered by the court would commence as of Week One, not Week Seven.

There are several serious problems with this contention. First, the NFL did not challenge the six-game suspension. The NFL argued only that six games aren’t enough. The NFL’s appeal focuses on whether the suspension should extend beyond the first six weeks.

Second, the NFLPA didn’t appeal the decision. That would have been the best and safest way to put Week One through Week Six in play for a court order that would allow Watson to play. The union apparently balanced P.R. concerns (it declared on Sunday night that it wouldn’t challenge Judge Robinson’s ruling) and legal strategies in deciding not to place the first six weeks in issue by filing its own appeal. And so the union will instead make the argument (weak as it may be) that an appeal by the league operates as a clearing of the decks regarding the unchallenged six-week ban.