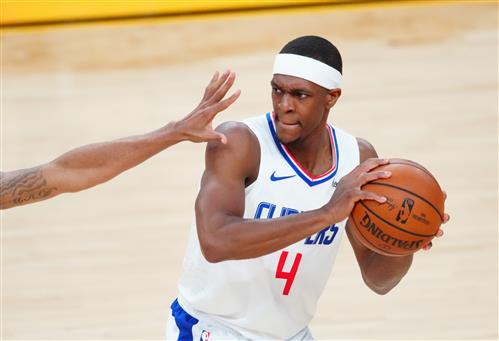 Rajon Rondo was one of the more dominant point guards in the NBA while he was with the Boston Celtics during the early 2010s, but after he was traded from Boston to Dallas during the 2014-15 season, he has seemed to bounce around a lot in this league.

Since being with the Celtics, Rondo has played for 7 different franchises and now finds himself a member of the Memphis Grizzlies after being traded there this offseason.

The Los Angeles Clippers traded for the veteran guard at the trade deadline last season from the Atlanta Hawks, but Rajon Rondo really did not make a difference for the Clippers.

As a result, the Clippers packaged him, Patrick Beverley and Daniel Oturu in a trade to the Memphis Grizzlies for Eric Bledsoe.

Memphis then traded Patrick Beverley to the Minnesota Timberwolves for Juancho Hernangomez and Jarrett Culver, but Rondo still finds himself stuck on the Grizzlies roster.

With him being owed $7.5M for the 2021-22 season, not many teams have shown a lot of interest in the former All-Star point guard, but he could draw a significant amount of interest should the Grizzlies look to buy him out of his contract.

The Grizzlies do need to free up some roster spots and with Ja Morant, Tyus Jones and De’Anthony Melton, they really do not have a need for Rondo, which is why they could look to just waive him and settle with paying the final year of his contract up-front.

If Memphis does indeed buyout Rajon Rondo from his contract, these four teams could look to sign him rather quickly at the veteran’s minimum.

One of the biggest question marks league-wide right now is what will happen with Ben Simmons and the Philadelphia 76ers. After losing to the Hawks in the Eastern Conference Semifinals, there has seemed to be a fallout between Simmons and the 76ers, which is why Philadelphia has been shopping him all offseason long.

However, the 76ers’ asking price is ridiculous, especially since Ben Simmons is not really much of an offensive threat as he’s shown during his time in Philadelphia. He is an All-Star and All-NBA performer that has the potential to be one of the better two-way players in the league, but he is a major liability right now that teams would have to be committed to fixing. Nobody has been willing to offer up assets equal to the Sixers’ price for Simmons, which is why he still remains on their roster.

At some point, it seems likely that Ben Simmons will be on the move, but the 76ers will need to have the right talents in their backcourt in place to take over for him. Tyrese Maxey is a young talent with a bright future and rookie Jaden Springer could be someone the 76ers look to take over the backcourt in time, but Rajon Rondo is a veteran guy that could contribute immediately for Philly.

Last season, the Philadelphia 76ers traded for George Hill at the trade deadline, but he barely played for them and left for the Milwaukee Bucks in the offseason, so the Sixers could use another veteran presence in their backcourt.

Rondo has been a part of multiple championship teams in his past and is still a premier passer/facilitator, which is why the 76ers would be at the front of the line to sign him to bring him to Philadelphia should he become a free agent.

After making the NBA Finals in the NBA Bubble during the 2019-20 season, the Miami Heat took a major step backwards last season due to health protocols and numerous injuries on their roster. Overall though, the Heat had a major lack of talent and scoring outside of their two All-Stars in Jimmy Butler and Bam Adebayo.

This offseason, Pat Riley and the Heat front-office made plenty of moves to solidify this team as a championship contender, bringing in the likes of Kyle Lowry, P.J. Tucker and Markieff Morris to Miami, as well as re-signing the likes of Duncan Robinson, Victor Oladipo, Dewayne Dedmond, Max Strus and Gabe Vincent.