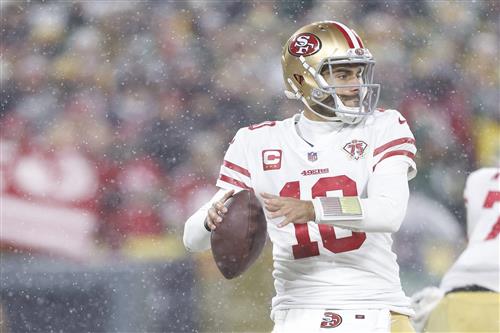 The San Francisco 49ers are a surprise entrant in the NFC Championship Game after walking into Lambeau Field and taking down the Green Bay Packers, 13-10. It wasn't pretty, but Jimmy Garoppolo did just enough to secure the big win. The 49ers' much-maligned quarterback deserves credit for taking his team this far. Which begs the question, what will San Francisco do with him this offseason if the team wins the Super Bowl? It truly is a puzzling situation.

The Niners thought so little of their incumbent starter that they used the No. 3 pick in the 2021 NFL Draft to select Trey Lance. They didn't just use that pick, the also traded the No. 12 pick, first-rounders in 2022 and 2023 and a third-rounder in 2022 to move up. It was a big, bold move to secure the quarterback of the future for Kyle Shanahan.

Lance clearly wasn't ready to play at an NFL level as a rookie, so Garoppolo kept his starting job. He was decent this season. In 16 games he completed 68.3 percent of his passes for 3,810 yards, averaged 8.6 yards per attempt and had 20 touchdowns against 12 interceptions. His passer rating (98.7) ranked ninth in the NFL and his QBR (53.4) ranked 13th. He was largely healthy this season and performed like a top-15 quarterback.

Lance has huge upside but he's also a huge gamble. He's a high-ceiling, low-floor type prospect, whereas Garoppolo is a low-ceiling, high-floor guy.