From the very beginning, the 2019-20 NBA season had its challenges. Just days before the season was scheduled to kick-off, Daryl Morey famously posted in support of the Hong Kong protests. The controversy rattled the league, severing their relationship with China and costing them hundreds of millions in the process. A lot of players were caught in the crossfire of the situation — caught between standing up for democracy and making an enemy out of the biggest nations in the world.

In January, the NBA lost two of its most important and iconic people: David Stern and Kobe Bryant. The deaths, which happened just weeks apart, broke the hearts of everyone in the community and served as a major (and obviously justifiable) distraction.

And, of course, we can’t forget about our current crisis. Following fears that Rudy Gobert had COVID-19, the NBA postponed the season only to discover that many of their players, from all different teams, were positive with the virus.

It will just feel weird.

If the NBA returns this season, it will do so without fans. The games will be played in a “bubble” — in Las Vegas or Orlando — where players, their families, plus coaches, trainers, and more will live, eat, work, and sleep. The games will be broadcast, but there will be no crowds, no fans in attendance.

Vince Carter was asked about playing without fans during Sacramento’s The Grant Napear Show with Doug Christie on Saturday, and he said NBA players have to adapt to changing situations all the time (hat tip Clutch Points).

“I’ve been dying to answer this question… When you toss that ball up and competition starts, and you’re in battle, how often do you worry about the fans? Yes, you hear them cheering, and booing you, I get that. But you’re in competition, you’re in battle. You should be focused on the guy in front of you, or the task at hand.”

Derrick Rose quickly blossomed into a superstar with the Chicago Bulls, but a series of knee injuries derailed his career and cut his time in Chicago short. The Bulls ultimately traded Rose to the New York Knicks in the summer of 2016.

Getting traded away from the Bulls was tough for the Chicago product. Rose’s agent, B.J. Armstrong, was recently on the Bulls Talk pod and talked about the guard’s love for his city. Naturally, Armstrong said Rose didn’t want to be traded.

Rose became the youngest MVP in NBA history in 2011 at the age of 22, and he led the Bulls to the Eastern Conference Finals that year. Unfortunately, the electric guard tore his ACL the following season and was never the same after that, with subsequent injuries adding to his downfall.

The COVID-19 pandemic continues to surge across America, putting basketball and football seasons in jeopardy.

At this point, it seems inevitable that games will be played without fans — if they are played at all. College basketball legend Dick Vitale has a strong opinion about that.

There’s been an ongoing rumor involving LeBon James around Knicks circles, which media members have been floating, and it apparently isn’t going away anytime soon.

James has two additional years (after this one) left on his current deal with the Lakers, and he’d be 39 years old when it expires, in 2022.

As such, he’d potentially be able to play for another team to end his career, if that’s what he’s looking to do. And in looking at his past decisions, there is a link to playing for and living in an attractive destination (aside from Cleveland, as that was essentially his hometown, having grown up in Akron).

We all know the heroics Shaquille O’Neal was able to pull off during his tenure in the NBA. By the time he retired in 2011, he was already considered one of the best big men to ever play the game.

Crazily enough, however, his success in the businessman world may be even greater. Once he walked away from basketball, he invested his money and is, today, worth almost $1 billion.

Rayshaun Hammonds is staying in the NBA Draft.

Hammonds shared a note on Twitter Saturday announcing that he has hired an agent and will stay in the draft.

Hammonds averaged 12.9 points and 7.4 rebounds per game as a junior at Georgia last season. The 6-foot-9 forward from Norcross is hoping to now have his professional dreams realized.

"I didn't think the G League was built – and I could be wrong – to go and recruit kids that want to go to college out of going to college," Hardaway said, according to the Memphis Commercial Appeal's Jason Munz. "Taking guys out of their commitments (or if) they've already signed and continuing to talk to their parents, it's almost like tampering. I really don't agree with that."

Hardaway lost out on top 2020 recruit Jalen Green – who narrowed his college choices to Memphis and Auburn – when he became the first major prospect to sign with the G League's new "Select Team" on a reported $500,000 deal two weeks ago.

The NBA Draft has become more crowded than ever, but one player is removing his name from consideration.

UCLA’s Jalen Hill is withdrawing his name from the NBA Draft and plans to return to UCLA.

Hill, a redshirt sophomore big man, had his name on the list of underclassmen who declared for the draft, joining fellow Bruin Chris Smith. 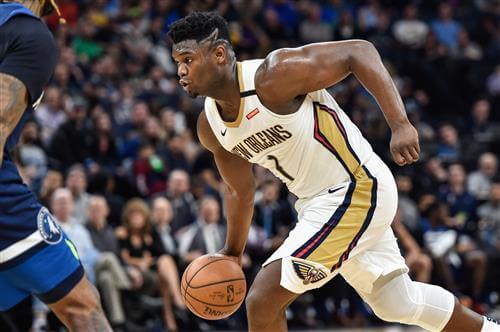 Despite playing just 19 games in his rookie season so far, New Orleans Pelicans forward Zion Williamson has proven that he is indeed a generational talent.

Pelicans head coach Alvin Gentry has witnessed Williamson’s athletic gifts up close, and he shared what separates the 6-foot-6 high leaper from other great athletes.

“Well, it’s pretty much what we expected. I still think that in all the years that I’ve been in the league, I’ve never seen anyone that has a second jump like this kid,” the Pelicans tactician said of Zion Williamson on Friday, via an NBA Conference Call.