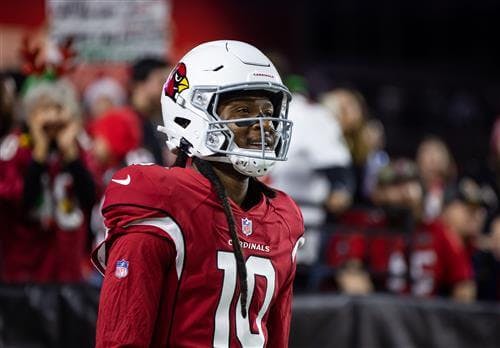 The Arizona Cardinals acquired star wide receiver DeAndre Hopkins ahead of the 2020 season as a way to get young quarterback Kyler Murray more weapons.

It worked out swimmingly initially with the former Houston Texans All-Pro recording 115 receptions for 1,407 yards in his first season with Arizona.

Since then, injuries and a seven-game suspension for PED use to open the 2022 season has impacted Hopkins. He could now follow recently-fired head coach Kliff Kingsbury out of Arizona this coming offseason.

According to NFL insider Jordan Schultz, the Cardinals will look to trade Hopkins here in the coming months.

This really shouldn’t come as too much of a surprise. Hopkins, 30, is set to count $30.75 million against the cap in 2023. He likely doesn’t fit with Arizona’s approach of a rebuild under owner Michael Bidwell.

The new head coach and general manager combination will also want some financial flexibility to improve a roster that won just four games this past season. If Hopkins is moved, there’s going to be interest in his services. Below, we look at four ideal landing spots.

It’s rather obvious that general manager Ryan Poles needs to get Justin Fields more options in the passing game. Darnell Mooney led all Bears wide receivers in catches (40) and receiving yards (493) last season. That’s just not going to cut it. With two additional picks in the 2023 NFL Draft via the Roquan Smith trade, Chicago has the draft capital to pull off a move of this ilk. It also boasts a projected $113.29 million in cap room.

Whether it’s Mac Jones or another quarterback under center in New England next season, wide receiver is a major need. Bill Belichick’s squad is slated to see leading receiver Jakobi Meyers hit free agency. He’s not a No. 1 option, and could be headed out of town. After that, there’s very little to write home about on the Patriots’ roster. Adding Hopkins to the mix would fix a lot of things for a pass offense that finished in the bottom-13 last season.