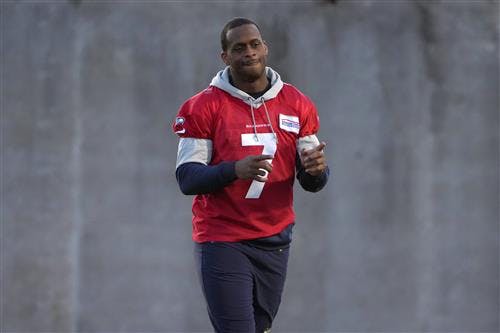 The Seahawks want one of the feel-good stories of 2022 to continue into next year.

Geno Smith, the surprise starter who has elevated himself into the MVP conversation, takes his Seattle team to Germany today to face the Bucs. Sources say the hope for the organization is that Smith is their QB into the future, as well.

In fact, the Seahawks want both QBs back — Smith and backup Drew Lock. They have yet to make an offer to Smith, who's set to be a free agent in 2023, to extend his contract, and those talks will happen after the season.

But it appears Smith has done enough to convince the team that his star turn is real and spectacular. Unbelievably, Smith is third in the NFL with a 107.2 passer rating, just ahead of … Patrick Mahomes and Joe Burrow. For a player who hadn't started more than three games since 2014, it's remarkable. Considered a career backup until he beat out Lock in training camp ahead of this season, Smith is completing 73.1% of his passes and has already thrown for 2,199 yards.