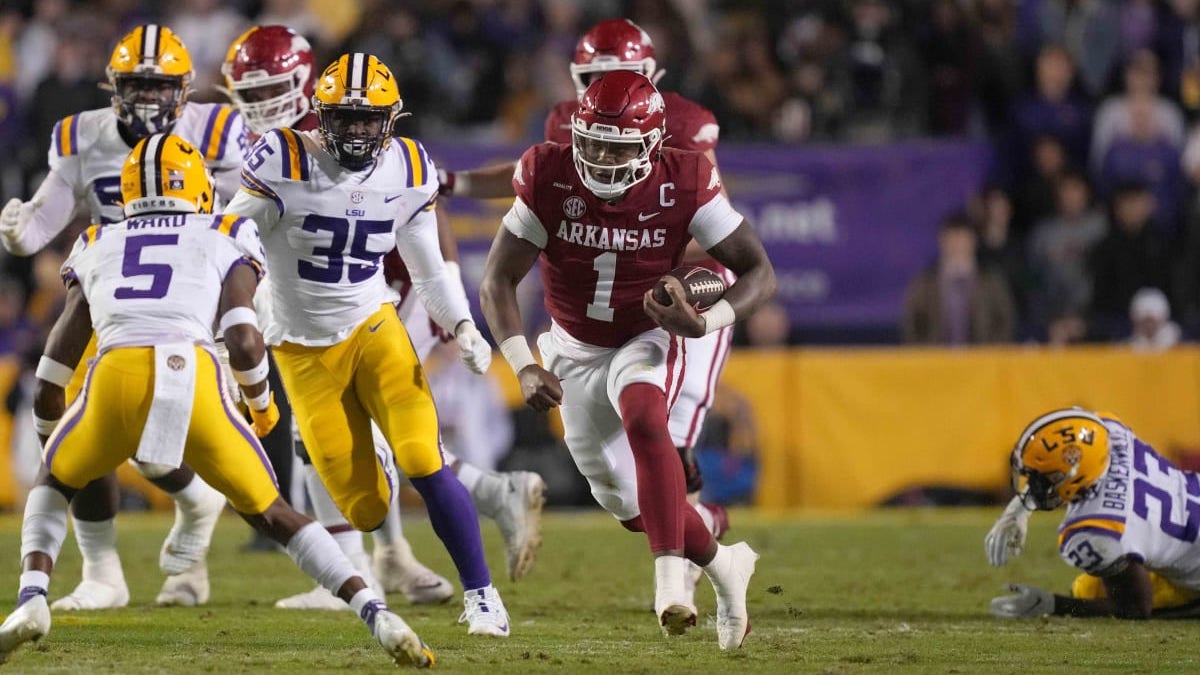 The Arkansas Razorbacks and LSU Tigers meet Saturday in week 11 SEC college football action from Razorback Stadium. LSU is fresh off a big matchup with Alabama. In that game the Tigers eked out a one-point victory in OT. As for Arkansas, they played Liberty in their last game. The Razorbacks would go on to lose in a close outcome.

LSU lost their first game of the year versus Florida State, but then took out Southern U, Mississippi State, New Mexico and Auburn. After a loss to Tennessee, the Tigers beat Florida and Ole Miss over their next pair.

In the Alabama game, the Tigers were outscored 15-10 in the fourth quarter and had to go to overtime. At the end of that period LSU had a 32-31 victory thanks to a two-point conversion. LSU’s Jayden Daniels threw for 182 yards and two scores while also rushing for 95 yards and a TD.

Over on the Razorbacks’ side, their year began with wins over Cincinnati, South Carolina and Missouri State before losses to Texas A&M, Alabama and Mississippi State. Arkansas then beat BYU and Auburn in the next two games.

Matched up against Liberty, the Razorbacks were down 21-5 going into the final quarter. Arkansas made a game of it with two more scores but still lost 21-19. QB KJ Jefferson bagged 284 yards with two TDs and two picks. Raheim Sanders added 60 yards on 17 carries.

Meanwhile, the Razorbacks are 2-5 ATS in their last seven overall and 1-5 ATS versus a team with a winning record. The over is 4-1 in Arkansas’ last five overall.

PICK: I’m going to stay with LSU, so long as they don’t have a hangover from their epic victory over the weekend. The Tigers finished with 367 yards, 22 first downs and a tepid 5-of-12 on third-down tries in the win over Alabama. That said, LSU controlled the ball well with zero turnovers and 32:00 in time of possession.

As for Arkansas, they made a valiant stab at a comeback in the fourth quarter of their loss to Liberty but ultimately the 4-of-16 on third downs and the two picks didn’t help. It’s going to be another tough game for Arkansas in this matchup.