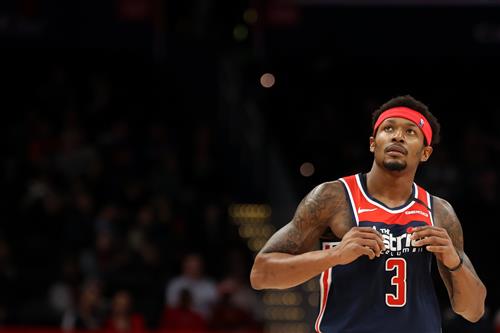 Mark Bartelstein, the agent of Washington Wizards guard Bradley Beal, told Adam Zagoria of Forbes that "there are no Beal Sweepstakes" in light of rumors that the Brooklyn Nets are interested in acquiring the 26-year-old.

His comments were in response to a report Thursday from the New York Daily News' Stefan Bondy, who wrote that the Nets "are in the market for a third star and have internally discussed avenues of acquiring [Beal]." Bondy also noted that it was "unclear whether Beal will become available."

Beal signed a two-year, $72 million extension with the Wizards last October. The extension begins during the 2021-22 season.

He said in a statement at the time:

"Both the Wizards organization and the city of Washington have been committed to supporting me and my family since the day I was drafted and I feel blessed to be able to show my commitment back to them. I'm proud to continue leading this team both on and off the court and look forward to being part of building something special."

Beal is averaging a career-high 30.5 points this season.

The Wizards struggled prior to the NBA season's ongoing suspension because of the COVID-19 pandemic, going 24-40, which is 5.5 games behind the Orlando Magic for the eighth and final Eastern Conference playoff spot.