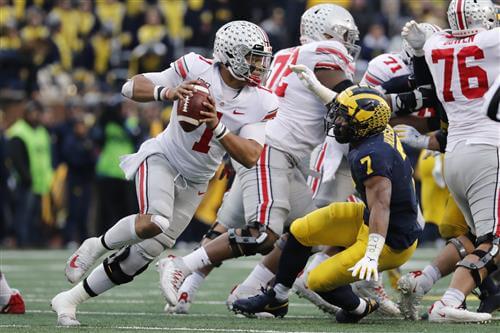 Ohio State quarterback Justin Fields made it clear Tuesday that he will not miss Saturday's Big Ten Championship Game against Wisconsin despite suffering a knee injury last week against Michigan.

According to Dan Hope of Eleven Warriors, Fields said: "In my mind, I'm playing on Saturday, I don't care how much it hurts."

Fields left the game against Michigan temporarily, but he returned with a bulky knee brace and led the Buckeyes to a 56-27 win over the rival Wolverines.

The sophomore star shook off the injury to throw for 302 yards and four touchdowns, while also rushing for 25 yards. Fields is a leading Heisman Trophy candidate this season by virtue of his 2,654 yards, 37 touchdowns and one interception through the air, and 470 yards and 10 touchdowns on the ground.