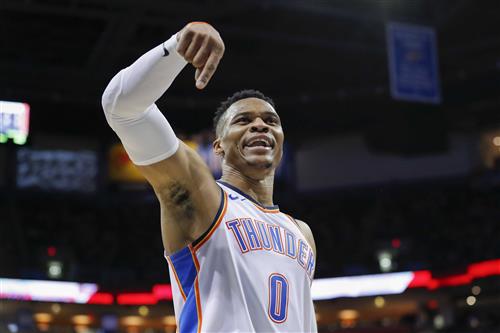 Russell Westbrook is once again the Oklahoma City Thunder's only star. For how much longer, though, we can't be sure.

Kawhi Leonard decided to join the Los Angeles Clippers early Saturday morning, as first reported by Yahoo Sports' Chris Haynes. His arrival is happening in tandem with that of Paul George, whom the Clippers pried from the Thunder at a draft-pick premium, according to ESPN's Adrian Wojnarowski.

What comes next for Oklahoma City isn't quite clear. Dealing Westbrook and beginning anew seems to be the fairly obvious move, but it isn't that simple.

Prospective suitors are even tougher to suss out this "late" into free agency. Cap space has dried up around the league, and so, too, have many of Oklahoma City's would-be options. Squads willing to take on high-priced point guards can now also try gauging the Toronto Raptors' willingness to unload Kyle Lowry's far more palatable expiring pact.

The Thunder's return on George—Shai Gilgeous-Alexander, Danilo Gallinari, five first-rounders and two additional pick swaps—affords them some flexibility. They can look to rejigger the roster around Westbrook or wait and see how this core fares in next year's wild, wild West before making any drastic decisions.

Rerouting Westbrook is hard in general. He is owed $171.1 million over the next four years, so teams won't treat him as a net-positive asset. The Thunder would be lucky to broker a trade that secures appreciable cap relief.

This is a staggering price (but worth it) for Kawhi Leonard + Paul George:

But neither choice feels like a viable solution. Not this time. As ESPN's Royce Young wrote:

"The Thunder are comfortable embarking on a rebuild rather than trying to retool. But they will evaluate their options going forward, which include seeing what this team looks like with Westbrook leading the charge alongside Gallinari and Steven Adams, trade current pieces to try and add to the roster, or hit reboot on the roster completely and trade Westbrook. The last option appears to be the most likely scenario."

Timing is everything for Oklahoma City. Trading Westbrook sooner rather than later might be the least painful approach, but potential destinations are drying up. If the Thunder have the stomach for it, waiting until midseason figures to open up the field.

File the Cavaliers under "Long Shots, But They Have Kevin Love."

Cleveland is in the early stages of a rebuild. Going after Westbrook short-circuits that from-scratch process. Stars are worth changing course for, but the Cavaliers have three ball-dominant guard prospects under their care in Darius Garland, Kevin Porter Jr. and Collin Sexton. Adding another, even if it costs one of the incumbents, isn't the most down-to-earth play.

Maybe that doesn't matter, or perhaps it merely matters less than the potential opportunity cost. Cleveland still has JR Smith's partially guaranteed deal on the books, which is worth $15.7 million in outbound salary but can be waived for $3.9 million.

Oklahoma City won't find more immediate savings. A deal including Porter, Smith and Brandon Knight trims more than $17 million from the bottom line and gets the Thunder under the luxury-tax threshold—provided, of course, they waive Smith.

The Cavaliers would have to reconcile the expensive overlap of this scenario. They'll have to cut salary to avoid the luxury tax even if they waive Smith themselves. Taking on Westbrook consigns them to a payroll north of $150 million, before taxes, next season.

They'd likewise have to figure out what Westbrook's arrival means for Garland and Sexton. Do they keep one? Both? Do they have to send one out as part of the trade? Is there another star out there for them to poach? Bradley Beal, perhaps?

And before the Cavaliers ever get that far, they have to ask whether a Love-Westbrook duo is worth the trouble. The answer is probably no, but if they're looking to strike in the East now without obliterating their asset base, Westbrook will be among the few splashy trade targets who don't force them to mortgage much more than future spending power.

Tethering the franchise to Westbrook and Blake Griffin (three years, $110.2 million) would be a risk for the Pistons, but it's not an inconceivable one.

Reggie Jackson is finally getting an offseason unimpeded by injury, and Detroit already signed Derrick Rose to a two-year, $15 million deal. That hardly shores up the point guard position.

Both are imperfect fits next to Griffin and Andre Drummond. Jackson is better than serviceable as the third wheel, but only if he regains his first-step burst and downs set jumpers at a league-average clip. Rose is a worthy backup flier but remains injury-prone. Ankle issues and a season-ending elbow injury blighted a 2018-19 performance that was already overblown.

Westbrook is not a clean fit himself. He is star power. His efficiency cratered last season, and the Thunder struggled to generate consistent offense when he played without Paul George, but he remains a force of nature. The pressure he puts on defenses with his ceaseless probes has All-Star value on its own.

Pairing him with Griffin might be worth a shot if the Thunder aren't charging more than financial relief. The Pistons have the wiggle room under the hard cap to offer them some.

Packages built around Jackson's expiring deal, Tony Snell (two years, $23.6 million) and some combination of Sviatoslav Mykhailiuk, Thon Maker and distant second-round picks should get Oklahoma City's attention. Detroit is free to walk if it takes more than a heavily protected first-rounder to sweeten the pot.

Heat president Pat Riley had designs on landing two stars by the end of next summer. Jimmy Butler makes one, so maybe Riley will move up his timeline and go after another.

Cobbling together workable Westbrook-to-Miami deals is difficult. The Heat are hard-capped after the Butler sign-and-trade and have yet to officially duck the luxury-tax threshold. They need to broker a salary dump (Goran Dragic) or waive-and-stretch Ryan Anderson's partially guaranteed deal ($15.6 million).