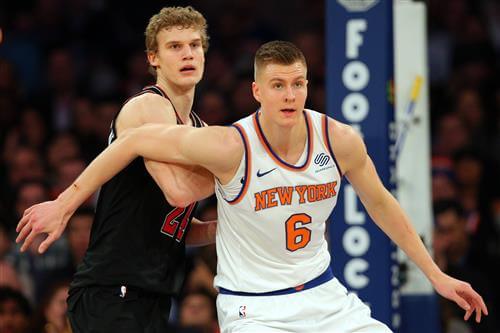 Citing a “high-ranking” source in the New York City Police Department, theNew York Post reports today that former Knicks and current Mavericks forward Kristaps Porzingis has been accused of rape by a woman who spoke to police on Thursday. The NYPD’s Special Victims Division is investigating.

According to the Post, the woman told police that the attack happened on Feb. 7, 2018, inside a Manhattan building where, at the time, both the woman and Porzingis lived. Porzingis invited her to his penthouse where, per the Post, she told police that Porzingis held her down and raped her. The report adds that the woman told investigators she didn’t report the rape sooner because Porzingis said he would give her $68,000 to pay for her brother’s college tuition, but then he went back on the offer.

As the Post points out, the alleged rape would have happened just hours after Porzingis tore his ACL in a game against the Milwaukee Bucks. The same report noted that, two months later, one of Porzingis’s brothers said in a documentary posted online that Porzingis did tequila shots with his brothers and physiotherapist at home after the diagnosis. Porzingis hasn’t played a game since that tear, and he was traded from the Knicks to the Dallas Mavericks in January.