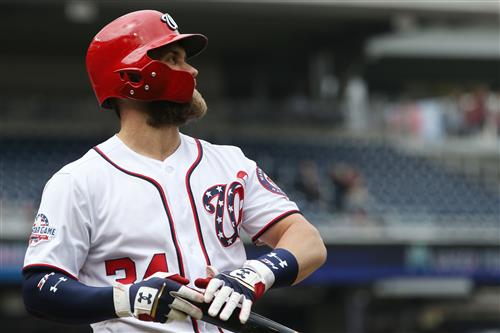 The Philadelphia Phillies, and not the Washington Nationals, have emerged as the clear-cut favorite to sign free-agent outfielder Bryce Harper after meeting with him for five hours Saturday in Las Vegas, three officials told USA TODAY Sports.

The officials spoke on condition of anonymity because of ongoing negotiations, but the Phillies have become the most aggressive team in their pursuit for Harper while the Nationals’ interest appears to be waning. Nationals executives are now calling a reunion with Harper a “long shot.’’

The Phillies, who also have interest in signing free-agent infielder Manny Machado, have yet to make an official offer to Harper, but are confident they will sign at least one of the two free-agent megastars. They were strongly encouraged about their chances of signing Harper after meeting with him, his wife and agent Scott Boras in Harper’s hometown. It was their first face-to-face meeting, which included two slide-show presentations by the Phillies. They are expected to make a formal offer within a week.

The Chicago White Sox and Nationals showed strong interest in Harper early this winter, but the White Sox have yet to make an offer to Harper, and the Nats have not formally engaged with Harper for nearly a month.