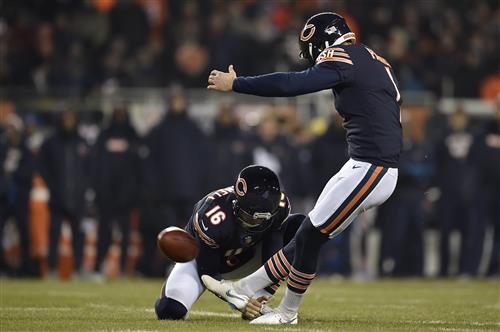 The Philadelphia Eagles continue to live a charmed life in the playoffs with quarterback Nick Foles.

After sneaking into the playoffs thanks to some help from the Bears beating the Vikings, the Eagles headed to Chicago for a playoff tilt with the Bears on Sunday night. The two teams both sputtered offensively, but Chicago held a 15-10 lead late in the fourth quarter when Foles was able to conjure up some more magic.

Foles found Golden Tate on 4th-and-goal for the go-ahead touchdown with under a minute to play, but a long Tarik Cohen kick return and a Mitchell Trubisky to Allen Robinson pass set them up in field goal range. It was then that disaster struck in the form of a Cody Parkey missed field goal, as his kick bounced off the left upright and then the crossbar, before falling to the turf in the end zone to give the Eagles a 16-15 win.

The initial look seemed to be that Parkey simply tugged the kick left, as it didn’t demonstrably change direction or rotation as it was on its way, but it was apparently tipped by Treyvon Hester, as he told Bo Wulf of The Athletic after the game and slow-mo footage shows the slightest of tips.