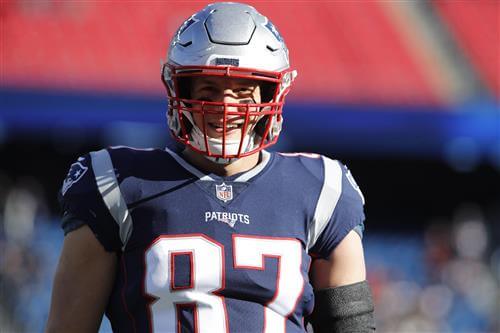 Tom Brady has already revealed that he plans to return for yet another season with the Patriots, but it's not clear if Rob Gronkowski will be joining him. When Gronk, who didn't squash retirement rumors last offseason until late April, was asked on Thursday about coming back for another season, he avoided providing an answer to the question with more elusiveness than he's shown on the field this year.

"I haven't been thinking about that at all," Gronk said. "We're on the last game, going into Week 17, we've got the Jets. And that's all I'm really worried about as of now."

A reporter followed up by asking him if he's still "enjoying" football, to which Gronk said, "Yeah. Definitely."

It's been a trying year for Gronk, who has been bothered by an ankle injury and hasn't been the unstoppable receiving and blocking machine he's been for so many years. He described this season as a "rollercoaster."

In 12 games, he's caught 45 passes for 658 yards and three touchdowns. He's averaging only 54.8 receiving yards per game, which would be the lowest rate of his career since his rookie season. Anyone watching can see that Gronk has lost some of his explosiveness, which used to make him an impossible mismatch downfield. Linebackers were too slow and defensive backs were too small. From 2010-17, Gronk averaged over 70 receiving yards and 0.75 touchdowns per game. For the sake of comparison, consider that Tony Gonzalez, who is often regarded as the best tight end in NFL history, averaged 56 receiving yards and 0.41 touchdowns per game in his career.